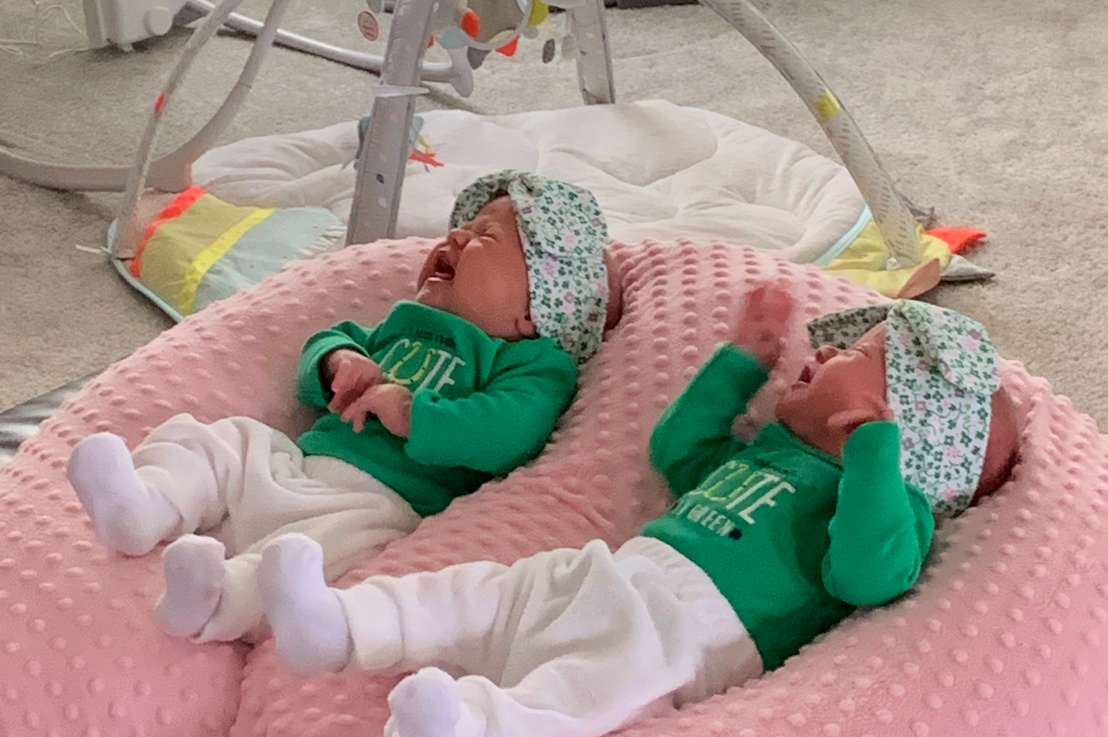 I haven’t written in awhile so buckle up this is going to be a long one. Not only will I update you guys on the latest exploits of Libby and Ava, but other observations that I made over the last few weeks. Erin, Elizabeth, and Ava are all doing great! Erin was a little nervous after the girls were born as I went back to school until summer break. She rocked it though! My mother, Catherine Peters, came up for the first week I went back to school. Erin also had other assorted help from neighbors, Mark Cunningham and Barb Cunningham, her parents, and my father Marty Peters all came to our aide at one time or another. Also, let’s not forget the twins’ Friday visitor Erin’s Aunt Kate has spent plenty of time over here helping out. We can not thank you enough for the love and especially the support you have shown myself, Erin, Elizabeth, and Ava since they have been born.

People reading this probably think that we have a screw loose or something but we decided early on that the girls were going to come with us when we went somewhere so they could get used to traveling. May 31st was a particularly busy day for the ladies as we ventured down to Columbus for the morning and early afternoon. Erin’s cousin Jenna, who happens to be Ava’s Godmother, had a baby boy Jackson James a few days before and was released home the 30th of May. Erin being the wonderful person that she is organized a meal train for Jenna and Tim and also organized for the not so techy of the bunch to make meals that we could load in our car and drive to Columbus for them. Once there, Erin went into full mama bear mode. She made lunch, got coffees, put all the food away and at one point was vacuuming. All the while the girls and I watched in amazement at their supermom. Around 3:30 PM we left and headed back to Cleveland and to a birthday happy hour for one of her closest friends. Remember when I said the girls go everywhere with us, well this might not have been the best idea but it worked out since the are the best babies in the world. We walked into Lindy’s Lake house in Lakewood not having any idea what we were getting into and the place was packed and loud. We sat down and left the girls in their stroller and knew whoever sat behind us was going to have babies at their table too. Luckily we had a great group of ladies at the table behind us and of course they loved the girls, so it all worked out. Lindy’s is excellent by the way and we had a great time as mama got after it!

We figured since the girls did awesome going to Columbus and then happy hour back in Cleveland, we decided to attempt Boston this weekend for our nephew Teddy’s second birthday. The ladies again were awesome! We left around 5 AM on Thursday morning after we feed them and then we took off. We stopped twice to feed and change and that was it until we got to Boston. On Friday the girls had their first train ride as we headed downtown to have lunch with Uncle Mike at Parish Cafe, which by the way I highly suggest if you are ever in Boston. It is a pretty cool little concept they take the best sandwich from chefs around the city and recreate it on their menu. They give credit to the chefs and the restaurant and the have a great beer list too. I digress, what happened on the train downtown restores your faith in the youth and the future of America. As we enter the train it is packed and we are 100% looking like out of towners. We squeeze in the back with the double decker stroller and Erin and I are hanging on to the bar. As the train starts to take off this young man stands up and offers my wife his seat. The young man was probably 15 or 16 years old and gave up his seat and stood so Erin could sit. It reinforced my belief that the youth of today as a whole are good solid citizens and shouldn’t be judged by a few bad apples.

On Friday night we had a birthday dinner for Teddy at Southern Proper. On a side note, it seemed the new food everyone was trying to perfect in Beantown was fried chicken and deviled eggs, they were on every menu. Back to the apartment and bed for the ladies Friday night. Saturday morning I went to core power yoga. This was no joke at some point in the middle of class I thought I was never getting up again, but alas I made it and am much better for the experience. Then we gathered the ladies and went to the park for a minute and then Trillium Brewery for lunch, excellent. I managed to bring some beer home from there so I got that as my souvenir. Saturday night we grilled out on Mike’s patio overlooking Southie as we all rested up for the big birthday bash Sunday in the park. I do not know where they get it but the girls have been awesome the entire time.

Sunday was the birthday party followed by a do or die game six for the Bruins in the Stanley Cup. Bruins won 5-1, birthday party was awesome as weather was great and all the kids, not mine, ran around and played. Ava and Elizabeth just slept. Monday moring we took off around 3 AM and wound up getting home around 4 PM. That was Ava and Elizabeth’s Beantown adventure. They were awesome! I mean no fussing, little crying when they were hungry but I do that too. I feel like I have been blessed with legitimate angels. Anyway the girls had a great time but are happy to be back home with their brother Hank awaiting the next adventure, wherever that maybe. Like I told Erin, with her on maternity leave this summer and I’m off it’s like we’re retired this summer!

For anyone that does not know, with my free time I am running for Avon City Council At-Large this November. I want to be at the forefront of bringing high end jobs to Avon so that we can turn our city into a place we can live, work, and play. This weekend we are walking at the Duck Tape Parade this will be the official start to my campaign and I hope to see everyone out there. I will also be at the festival so don’t be a stranger if you see me it is my mission to meet as many residents of Avon as possible before November.

This week’s blog is brought to you by https://tb12sports.com/ use them for all of your fitness and diet related products.