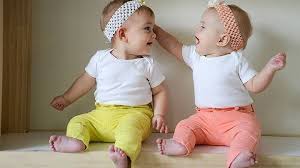 On Friday something happened that I hope never happens again, but I know it is going to be unavoidable.  Erin had an ultrasound and I couldn’t go.  Being mono-di twins puts us in the high-risk category so we have to get ultrasounds every two weeks from now till we deliver. Friday the appointment was at 1:00 pm and my planning period at school start at 1:30 pm, so I was expecting a call on how everything looked shortly thereafter or at least by 2:00!  I have never been so nervous in my life.  I called her at 1:45 and then again at 2:00 she finally texts me that ultrasound was over and that everything was fine.  I almost threw up I was so nervous! I was so mad at myself because in my mind Erin was getting bad news and was on her own and I wasn’t there.  I think I get that from being around Erin, although she blames her mother for being so high strung. The babies are continuing to share and grow together.  They are 14 oz. each and she got to see all of their anatomies, save for their sex.  I was so proud of her, I was sure that her mother had gotten to her earlier that day and convinced her to find out since I wasn’t going to be there but she held strong.  At this point, you can put it in sharpie that we won’t know the gender until they arrive.

One thing that comes with pregnancy that no one warned us about are unwanted comments from basically strangers.  On Friday we were in Parma and an elderly lady came up to Erin and said, “Wow being 36 I bet you were shocked to find out you were pregnant!”  This was funny because we really don’t know the lady, she was a friend of Erin’s grandparents, so we really relish her input.  Erin’s belly is also growing as the twins get bigger and the old lady’s friend feels the need to tell Erin, “You sure there aren’t three in there!”  Thanks for your concern lady, but three has been ruled out by a couple of doctors.  You never know what you are going to hear on a random Friday night in Parma!

This weekend was the greatest game of the year Army vs Navy.  I ran a poll on Twitter and it had two choices, best game of the year Army vs Navy, or any other game.  I’m pretty convinced that whoever did not vote for the Army/Navy game has no understanding about what that game really means.  This game is not about individuals and looks at me athletes, this game is about the Midshipman and Cadets playing a game that they love and getting a break from their everyday grind they endure every day.  The pageantry at this game is awesome from the Midshipmen and the Cadets all being on the field for the national anthem, the President of The United States doing the coin flip, flyovers, and the winning team singing their alma mater second this pregame will bring a tear to your eye. The game in itself is well played, players are all fundamentally sound, you don’t see anyone showing the other side up, there are no cheap shots it is very refreshing to see athletes legitimately giving all they have for the guy next to them.  There is a brotherhood on the two teams before the game and there will be a great brotherhood between all of them as they embark on to their next duty station.  This is the only game where all of the players are willing to die for all of the viewers.  That is why this is America’s greatest game. Oh and by the way, Army has no won three in a row, I’ll be collecting shower weekend from Michael.

In two weeks we get to see the twins again so look forward to another update then.  Until then Merry Christmas and have a great week.