Foodandfootballandeverythingelse.blog is also brought to you by @TB12sports and @mbpeters4 see them for all of your nutritional and workout needs.

Well, Monday and Tuesday were nice mid 60’s creeping into 70, and then Wednesday hit.  I left the house around 6am and the temperature in the car read 51, so of course, I do not have a coat on.  When I leave school the temperature says 38, wish I had a coat.  Anyway, spring is getting closer as the Cleveland Indians are playing their first spring training game today against the Reds.  Baseball is back, and summer is around the corner, thank goodness!  The best thing the Indians have done in recent years is the get-away games in the middle of the week at noon.  These games are right up my alley, they are usually over in 2-2:30, perfect home by 5-5:30 in time for dinner or a round of golf.  I plan on attending at least 3-4 of these games this summer.

Speaking of golf, I cannot wait to get out and play this summer.  I plan on taking a few lessons this year before the season, so if you have anybody that you like to recommend feel free to let me know, thanks in advance.  I am so excited that Tiger Woods is playing this week at the Honda Classic.  He played last week at the Genisis Open, so playing two weeks in a row means that he is healthy, doesn’t mean he will win like he did in the early 2000s but he is healthy.  As I said in an earlier edition of foodandfootballandeverythingelse.blog it is impossible for Tiger to be that dominant again, because of the number of great players that there is today.  The other day Rory McIlroy, one of my favorites, said he had never seen a crowd like the one that followed him and Tiger last Thursday and Friday.  The great players today do not have any recollection of the greatness that was Tiger Woods, his mystique was all part of his intimidation before they teed off.  I ordered a t-shirt from Barstool Sports that has the Tiger fist pump silhouette in green and yellow and says “Make Sundays Great Again!”  I can not wait for the scene at Augusta this year especially if Tiger is playing well and contending for tournaments.  Tiger Woods love him or hate him makes golf better, here is hoping for a great Masters Tournament. On a side note does anyone else have a better job than Jim Nance?  Back to back weekends, he calls the Final Four and the Masters, I would trade with him tomorrow!

On Wednesday night Erin and I were out and were hungry, or as she would say, “I’m getting Hangry!” We were trying to decide where to go and it was between Five Guys, always a good choice and quick to I might add, then she brought up Parker’s in Avon Lake, so that is where we ended up.  Parker’s has a great atmosphere and Wednesday night they had live music, nothing big but a guy with a guitar that could sing, it was nice.  Sometimes you go to those places with live music and it sucks, the music is too loud and you end up screaming at each other or not talking at all, but Wednesday was perfect.  We both got salads, I got the grilled chicken cobb salad and Erin got the steak salad.  My salad was great a generous portion of the usual bacon, eggs, feta cheese, tomatoes, and avocado, which I have grown fond of, and I got blue cheese dressing instead of ranch.  The lettuce was crisp, which makes a salad in my opinion soggy lettuce is the worst.  All of the ingredients were fresh and tasted fantastic.  I got water to drink was thinking maybe a beer but I changed my mind. Our waitress was amazing and was seemingly very good at her job.  She came over to the table to see if we needed anything just enough times not to get annoying, it was a lovely meal, I thoroughly enjoyed it.  On the Shamrock scale, I give Parker’s in Avon Lake. ☘️☘️☘️☘️ We will definitely be back!

Any BBQ catering needs in the Cleveland area see @WCPeters_1 Calendar is filling up fast for spring and summer!

On Wednesday, I get a text from Erin that reads, “Do not kill me, but I signed us up for something!”  I had to make 20lbs of pulled pork for a party on Saturday night.  This is one of my favorite things to do, no idea why she thought I’d be mad.  Thursday on the way home from school I swung by T.L. Keller’s Meats in Litchfield, Oh to pick up the pork butts.  If you are anywhere near Litchfield I highly recommend getting meat from Keller’s, it is a family-owned business where all the animals are grass fed, they cut out the middleman so the prices are a ton better than the grocery store, on the Shamrock scale, I give Keller’s.☘️☘️☘️☘️☘️ I digress, I got the pork butts ready Thursday night and put into the refrigerator overnight.  I injected each butt four times with a mixture of Three Little Pigs Championship rub and water, each injection went into a fat seam which will allow the injection to spread throughout the inside of the butt.  Then I rubbed each butt down with yellow mustard, bought from Aldi’s for $.69, and then sprinkled Three Little Pigs all over the butt as a base and then topped it with Three Little Pigs Sweet for it to form the great crust that is the signature of pulled pork. Here is a picture of the butts before I put them in the refrigerator: 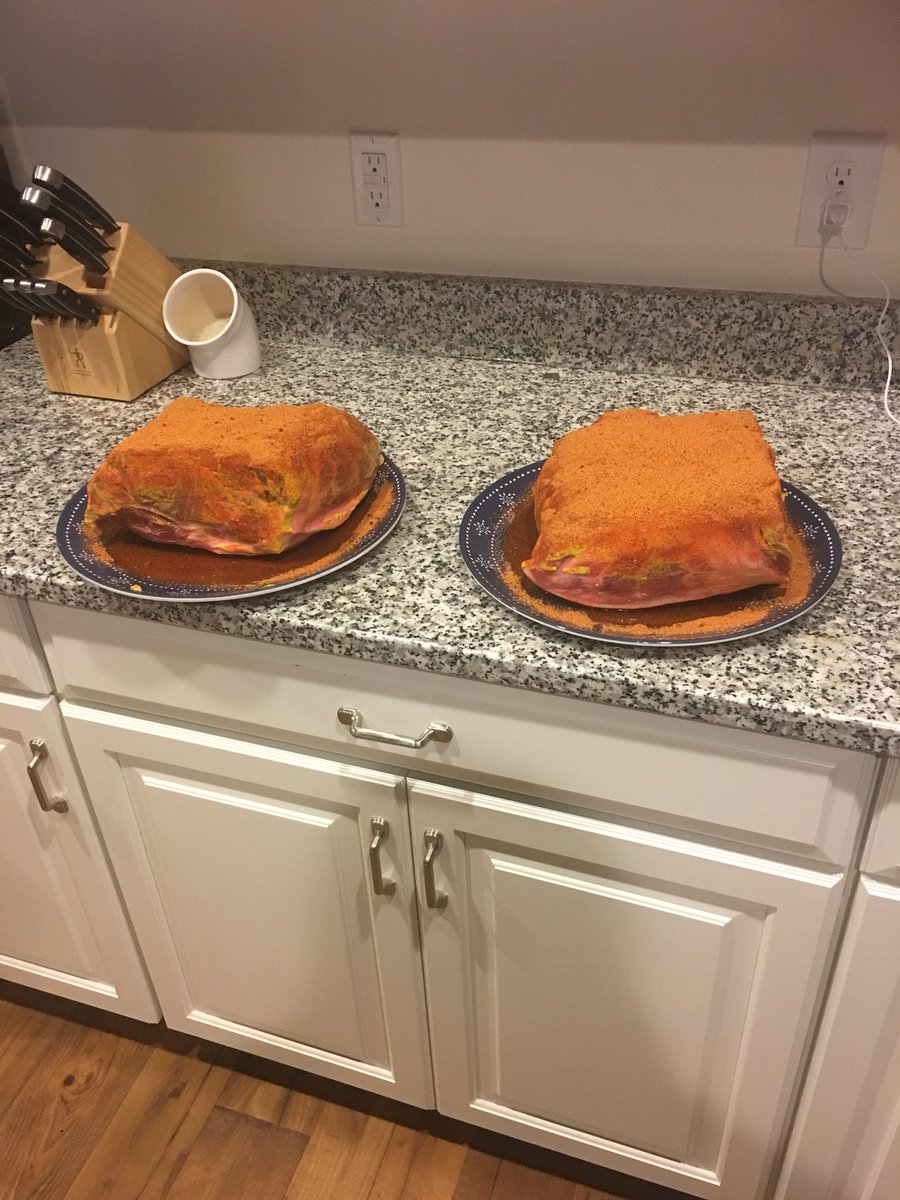 Friday night I put them on the smoker at 225*, after they had been in the refrigerator for about 24 hours.  I feel that the colder the meat is the better smoke flavor that the meat is able to absorb while smoking.  The butts only cooked for about 12 hours which was faster than I thought, but they turned out delicious.  The picture is only one since I forgot to take a pic of the second too, sorry. 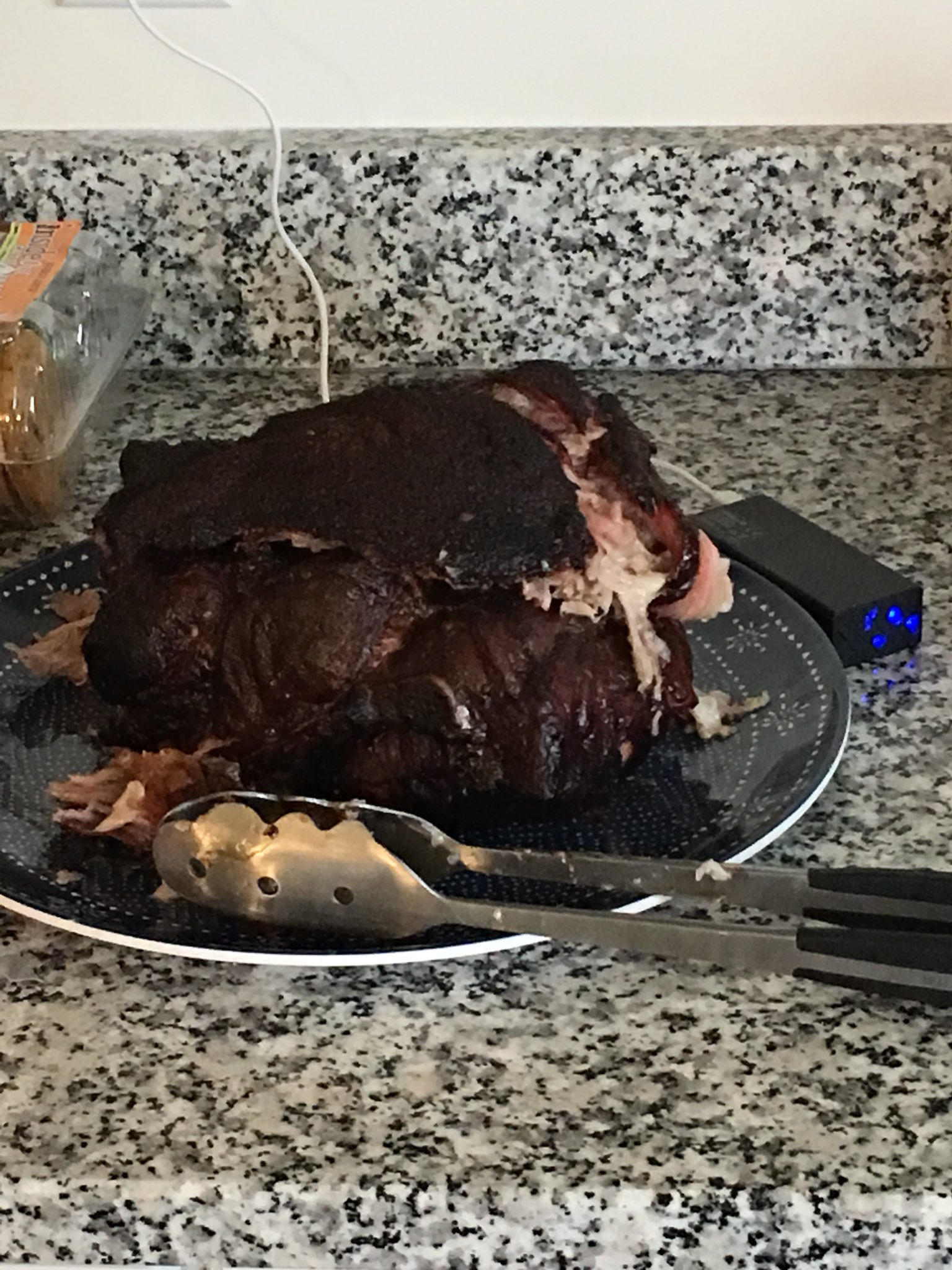 I use a Green Mountain Daniel Boone Pellet Smoker, I love it and get the same amount of smoke flavor through the preparation of the meat as I would if I used a charcoal and wood smoker.  The preparation of the meat is key to achieving the quality product that you want.  Also, a great resource on social media is my man, @ChrisMarksBBQ, I have only physically meat him once, last year at a class he held at The Heat Exchange in North Ridgeville. Anytime I hit him up on Facebook or Twitter with a question he is quick to reply with a great answer it doesn’t matter whether it is a holiday or not.  I would also like to thank my other inspiration @HankBrock7, watching him cook and the pure joy and pride he took in it was one of the reasons that after I got married and moved into a neighborhood I really wanted to start smoking and BBQing.  Thank you guys for all of your help and inspiration.

Next Friday is the NFL Combine so expect the first annual foodandfootballandeverythingelse.blog mock draft next Sunday, complete with trades and all sorts of goodies.

Until Sunday Love you guys!